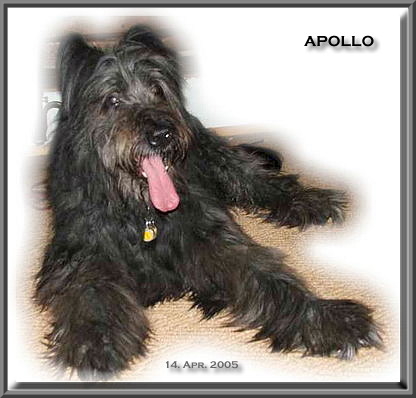 As loving aura fills the sky
as you rest on clouds of fleece,
and angels gently tuck you in,
may you sleep in heavenly peace.

Apollo is out of the first litter of our kennel de la Maison du Garde-Barrière. At the age of eight weeks he came to a retired couple in Lower Austria; already at the age of four weeks Apollo himself decided for family Hauser. He had a most wonderful life as a single dog and was together with his owners all day long.

On April 15, 2005, we were contacted via e-mail by the assistant of the vet of Apollo and were told that this boy URGENTLY and immediately needs a new home: his Dad fell ill with major Alzheimer and was in hospital, and his Mum was shortly before dying with cancer. Apollo's Mum wanted to spare her darling the shelter home and had gone to the vet to ask him to put Apollo down. Because of the good physical condition of Apollo, the vet strictly denied to do this and now the clinic was on the search for someone who could give this boy a nice retirement. The vet assistant had started to search with the dates in the pedigree and the health certificate and by this way found the e-mail address.

As exactly one month ago our beloved Samson had gone over the Rainbow Bridge, we immediately decided to take this boy. Apollo should spend the eve of his life where he had been born - this was what we owed him and his owners. I also called his owner: she should know before her death that she need not worry about her darling, as he would come here. Mrs. Hauser was very relieved and happy. On the same evening Apollo was picked up from the vet assistant, who had taken him for some days. Apollo immediately got into the car and slept all the way. What made my throat tie up, was that the complete life of Apollo was packed into a plastic bag: his blancet, food and water bowl, health certificate, pedigree, collar, lead, toys, even his puppy collar which had got with him when he left the kennel years ago. A complete life - 11 years - packed in a plastic bag ......

The owner of Akira, a sister of Apollo, was joining us and while driving decided that he would take Apollo to his home as he had only girls in the house. Unfortunately this did not work, as Apollo attacked the weakest lead of the pack, a mix breed girl which had major leukaemia. So Apollo came to us on the next day. After a short time he recognized us and this probably made it easier for him to get comfortable in his birth place. Luckily he took the offered food from beginning on and, therewith, a big hurdle which we had been scared of, was taken. Both our girls Whoopy and Oh-Lala also helped Apollo very much to feel comfortable. Finally he preferred Whoopy being his permanent companion, as she was more leisurely than Oh-Lala.

On July 1, 2006, we had to say good-bye to Apollo and let him go over the Rainbow Bridge: his legs did not want to carry him at all any more and completely gave way. Fourteen months long we have enhanced this good soul his eve of his life with lots of love, after he had been torn out of a full and marvelous life at his owners at the age of 11 years.

We hope that we were a good substitute for you, dear Apollo, for the beloved people, for which you had been the focal point of their lives, their everything 11 years long.