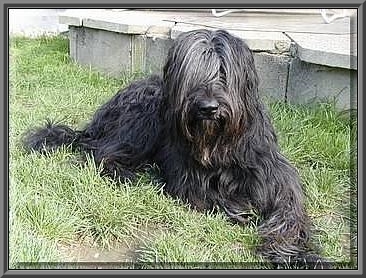 God looked around His garden and found an empty place.
He then looked down upon the earth and saw your tired face.
He put his arms around you, and lifted you to rest.
God's Garden must be beautiful, He always takes the best.
He knew you were suffering, He knew you were in pain.
He knew that you would never get well on earth again.
He saw the road was getting rough,
And the hills were hard to climb,
So He closed your weary eyelids, and whispered "Peace be thine".
It broke our hearts to lose you, but you didn't go alone,
For part of us went with you, the day God called you Home.

Already when the E litter was born, we decided that we keep a female. The choice was Whoopy. Certainly in our eyes she was "only" the second best of the litter, but for us it was important that the best girl goes to a show person and breeder in a foreign country. Finally, when Whoopy was grown up we decided that we don't use her for breeding: she turned to be too high (according to standard still tolerable, but for ourselves not satisfactory) and she carried her tail, which got a strong hook, too high. We did not want to search for a home for her, as it is not our nature to part from dogs which we decided to keep, just because they are not suitable for breeding.

So Whoopy was "just a pet" and enjoyed her life by doing what at the moment she liked most. Actually she was a calm dog and preferred to be together with ones which were the same. As long as Apollo was with us, he was her companion because he really harmonized best with her. She loved to toll around in the garden with huge cuddly toys (the bigger the better) or use them as her pillow in the house. For shaking these toys like crazy, they "live" for quite a long time. But if finally one is really ruined, a new one had to be offered immediately, because if not, Whoopy was totally unhappy. It's especially remarkable that this girl was never ever sick until end of April 2009.

When Whoopy was really grown up she suddenly acted with a dominance towards other big female dogs, something which we had not known from her and also had not expected. She even tried to dominate her mother, which this one could and would not accept. To steep clear any conflict between our females, since that time Whoopy was kept in a part of the house and garden together with one of our tiny breeds or with a male, where it was impossible for her to produce trouble with another Briard girl.

Whoopy had a very special relationship to our Yorkie girl Gizmo. Maybe this was because the tiny personality - herself only seven months of age when the E litter was born - was scrambling about in the litter box from the moment the puppies were three weeks old, and with the biggest pleasure she joined them tolling around and playing in the house and garden.

Until the last day of her life, one could not see that Whoopy was an older lady, because she still shook her toys like crazy and tolled around with them in the garden, so that one would have thought she was a young dog. When she had a rest,  she loved to just lie in the garden and watch the other ones.

All of a sudden Whoopy was different and we knew that something was wrong with her. She had a major emergency surgery on April 27, 2009, and with the effort of our favorite vets as well as with blood transfusions from our other Briards Courage and Frizzy (her half-brother), she survived and it seemed she would turn to be healthy again. She had the will to live, she had so much fighting spirit - just like her mother Yazoo - but she lost her fight nearly three weeks after the surgery, only two days before she would have turned to be 10 years old, only four days after her sister Raven in the USA. Much too early, too suddenly and unexprected. On May 16, 2009, we had to open our arms to let her go over the Rainbow Bridge, where for sure she was expected by her parents, her siblings and her friends.

Whoopy, you are missed and you will be unforgotten here, just like all the other ones from here which have already gone over the Rainbow Bridge before you. You will always have your place in our hearts, and the beautiful memories of you will hopefully give us the strength that one day we will fairly get over the pain about your so sudden, unexpected loss. Thank you, dear Whoopy, that we were allowed to join you for some years, beginning with the day of your birth ..........