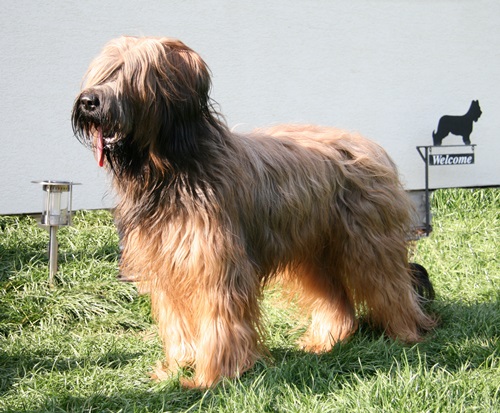 Courage is out of the long desired litter from Zabou. Already prior to the birth of this this litter, it was for sure that we would keep a girl, as her mother had the problems with the mycroplasma. Courage was a real dominant puppy, she had got the hang of all her siblings. Our choice was this girl after the owner of the stud, who had first pick for a girl, had chosen her puppy. Courage had been her favorite, but because she had the same dark color as her father, Pascale decided for another girl. We were happy about this, because since the fourth week of the puppies we had had Courage in mind for us.

When all the puppies were out of the house, Courage turned to be calmer; she even had a phase, that when she was outside of the own compound she was scared when meeting other dogs, whereas, she was in the middle of all the other ones here when tolling around. So we visited a puppy training course and she turned to be so much safe, that sometimes we wished that she would still be glued to us as she was in the beginning of the lessons. As much as she had hesitated at the beginning of the lessons to play with other dogs (she only tolled around with her sister Kiara), as hard it was after a month to call her back from playing with the other ones. So this was a real success.

In July 2007, only one day after her first birthday, Courage jumped down the balcony of our friends in Switzerland (5 meters high) and was lost for eight hours. All day long we searched for her in the village and the surrounding. She was seen several times from people who immediately informed us, but when we had reached the place where she had been, she was gone again. One can imagine how big the relieve was, when finally we found her in a dried brook in a nearly unapproachable part of wood, from where she could not get out alone, as it was too high to get up after eight hours of running around in a foreign and not known area. Thank goodness that Courage was not injured, respectively survived this jump ...... actually after some hours we were close to giving up that we would ever find her again, and that we would have to go back home without beloved Courage.

As all the other ones, she gets along greatly with our smallest ones and she loves to play with them, but carefully ...... obviously she has got this from her mother.

Courage was shown and she has already brought great success back home. Already when having been in the show ring for the very first time, she came out as the Junior Winner and at the age of not even two years she was already Champion of Montenegro.

Even though she turned to be nearly eleven and a half years with her major hip luxation, for me she went way to young. The wonderful memories of that great girl may give me the strength to deal with the pain. In the part of my heart which she did not take with her, she will live eternally, and she will be forever unforgotten. With the loss of Courage now the book of my Briard breeding is also closed ......

On 01/30/2018 Courage has been cremated, on 02/03/2018 I got her urn and a little pendant with a bit of the ashes home. Now Courage is where she belongs: with all the others on the memorial board, and the pendant is hanging on the rearview mirror in my car so that Courage joins me on each trip.