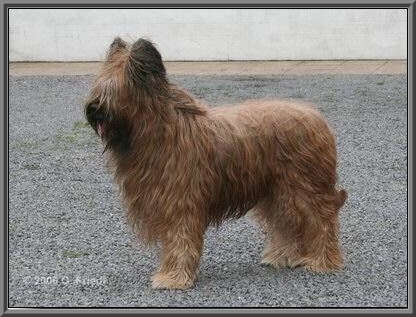 When nights are coldand stars are few,
I close my eyesand think of you.
A silent hope,a silent tear,
a silent wishthat you were here.

In October 2001 we imported Zabou from Belgium. Her breeder and our dear friend Pascale came to Vienna by plane and stayed her for some days. With Zabou the first own fawwn Briard came to the house.

She is descended from an excellent Belgium-French line and so we were very hopeful that we could go on from the breeding success with Yazoo with this new girl. Unfortunately the calculation got wrong: At the bacteria check before the second mating, it was testified that Zabou had a major attack of mycroplasma bacteria. Therewith, it was plain why at the first try - when she was documented clear from bacteria - she remained empty: She had been infected with these bacteria by the stud at her first mating. The bad thing with these bacteria is: they have a spectrum like the herpes virus and come and go; they cannot be eliminated definitively. Mycroplasma kills the sperms and of course also infect the stud when breeding. Zabou got antibiotics treatment immediately, but as she has to be mated on the fifth day of her season, also this trip to the stud was in vain, as the treatment can only be successful if it is made for 10 to 14 days. The question was if we should have some other tries for puppies or if we should refrain from breeding this beautiful girl full of character. We decided not to give up immediately. 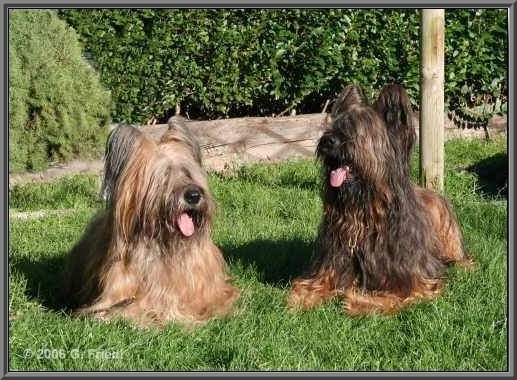 Lots of examinations and tries of treatment followed (we are infinitely grateful to the responsible veterinary in the Vet. University of Vienna). Zabou had to be check one or two months before her season to have her treated successfully with antibiotics for the forthcoming mating, so that she would be clear of these bacteria at the point of breeding. The third breeding try in May 2006 worked and therewith, we had our first and long time desired litter after Zabou, the K litter. The next try unfortunately did not work likewise: Zabou postponed her season rhythm after the litter, and so it was too late for a treatment against the once again present bacteria. We wanted to have a last try in 2008 and Zabou was at the time of examination clear of mycroplasma ...... but the stud chosen from us was not available for the point of mating, neither was the second one we had taken into consideration. As it goes against our grain to use any stud, just to have puppies, we gave up and now hope that we are going to have more luck with our breeding plans with Zabou's daughter Courage.

Zabou was very vivacious and impetuous as a puppy and young dog. We nearly could not slow her down. The more we were astounded when at the age of nine months she was the best and most careful playmate for Oh-Lala's puppies. When she was grown up, she matured to a self confident, safe, good to handle and very social girl. She was an exemplary mother for her puppies, which makes it even more regrettable that we could only have one single litter after this girl. Zabou gets along perfectly with all our dogs - with the Briards as well as with the tiny breeds. She is an excellent playmate for puppies and grown up dogs, especially for our tiny breeds. Never ever she takes advantage of her size and/or her strength towards the small ones, constantly she lets walk all over her and never sets the younger ones limits. She is just to tolerant, of which the small ones make the most of, if we don't step in and part the little rascals from Zabou, so that she can have her phases of rest.

Zabou has been shown some times and then always came out of the ring with excellent results. When the shows with our Chinese Crested started and when they were shown frequently in foreign countries, we stopped "show business" with Zabou, but maybe she will be back in the show ring when she is a veteran. 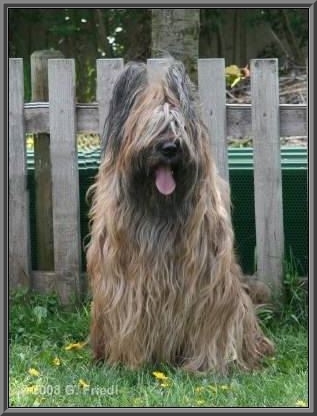 Even though our breeding plans with Zabou could not be put into action and our dreams did not turn true, we were grateful for each and every day with her and we did not want to miss this girl. We thank Pascale that she chose exactly this girl for us (we had only seen the puppies in the Internet and relied fully on Pascale, as she knew what we wanted and what we had in mind).

When Zabou was torn out of our lifes without any sign of a disease on July 19, 2009, at the age of not even 8 years, another part of our hearts broke, a wound which will never completely heal, even though we have her daughter Courage here. This great girl went much too young over the Rainbow Bridge, and a small comfort can only be the fact that one day we'll meet her again with all the others. And also one of our Chinese Crested has suffered for a long time that his very best friend was not longer with us: Voodoo - for him Zabou was everything on each day he could join her. 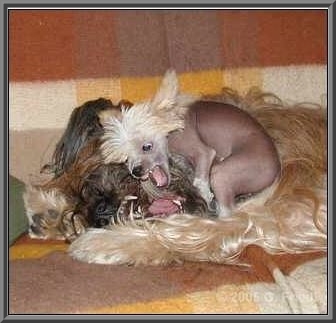 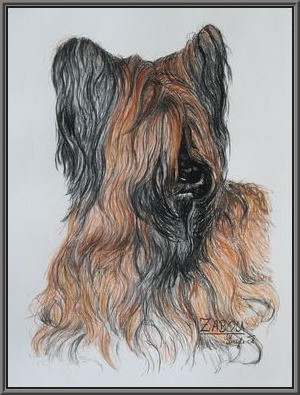