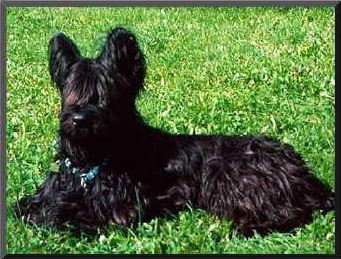 When you were born it was raining all night long.
Not because it was meant to rain,
but because Heaven was crying to loose his sweetest star!

Your candle of life burned down on September 25, 2000
- much too early and so unexpected for us.
Your light here on earth has forever stopped to shine.
Another small star has began the journey to Briard Heaven.

Since then we know how Heaven felt
the other time - on your birthday.
Fare well, ARWA. You left big emptiness
in our hearts, deep pain and endless sadness.
THANK YOU for the light and life
that you brought to us within the few years
we were allowed to join you.

Arwa only came to us when she was four and a half years old. We had learned to know and love her after she had been bred to our Sándor (Rec. Champ. SÁNDOR von Anitzberg) in 1992 and whelped 12 puppies after him on October 20. Every week we were together with friends visiting Arwa and her children and brought food. Arwa and her puppies were living in a cellar, when there was pouring rain lots of water was in front of the whelping box, there was no heating, everywhere around Arwa there was nothing else than junk, ...... Unimaginable that a dog had to raise her puppies under such circumstances. Obviously it was not often that someone looked for Arwa, as she was always overwhelmed with joy when we came, and this was probably also the reason, why she greeted us so happily at our first visit and let us touch her puppies and even take them out of the whelping box (already in the first week of their lives) although she did not know us. She herself relished the big attention we gave her and the pads - this was probably something, this eandearing girl was in short supply with. As some of the puppies of this litter should go to Austria, we took care about correct ear glueing, brought toys for the puppies, supplied the anti worming stuff and took care about the vaccinations, so that we could be sure, that all puppies had the necessary shots until they were going to their new homes. We took a daughter of Arwa for ourselves (Arwa Betkin dvor) - Christmas 1992 this girl moved to our home.

We never broke ties with Arwa (luckily, because therewith we got to know what the plans of her owner were). Because of her charming nature and her trust in us we grew very fond of this girl. After another litter of her we got to know that she should be put down because her owner did not have the expected success with her with Briard breeding, and nobody wanted to take this girl. We did not hesitate even a moment and picked up Arwa when her puppies were seven weeks old. She got into the car immediately and did not even turn her head when her former owner wanted to say good-bye to her. This told us very much about the terms between the owner and this girl.

Having arrived at home, Arwa immediately had to undergo a thorough batch, which did not at all bother her. When she was then brought together with our other dogs, she shortly looked at them and then went over to Marko without hesitating, instead of to one of our Briards. She had been living with German Shepherds, and this was probably the reason. After some tolling in the garden she wanted to go to the basement, she did not make one single step into the house. This showed that she had not been allowed to set foot into the house of her former owner. Only after a great deal of coaxing and lots of treats we could finally persuade Arwa that in our house any room is open for dogs and that she was allowed to move everywhere. This poor girl had to learn how to run on tiled floor only at the age of four and a half years. ......

Until his death Marko was the undisputed favorite of Arwa. They had such an intense friendship that after Marko's death we were scared that Arwa would maybe follow him soon. Thank goodness this did not happen, but she searched for him for some days.

With Arwa we had our A litterde la Maison du Garde-Barrière - after our Sándor. The litter was actually planned for later as she had had puppies, but Sándor was faster than we were, and so it happened. She whelped 11 puppies, unfortunately four of them were still born. And now we were shown how intense the relationship from Arwa was with Marko: he was allowed to get into the whelping room and look at the puppies from the first moment on, whereas Sándor and daughter Arwa B. were growled at, when they approached the door of the room. And it was Marko who always helped out when Arwa had her well deserved rests from the puppies, and he was also besides her as a helping hand for the education of the puppies.

Arwa was an uncomplicated, excellent to lead and cuddly girl. Friends and strangers were let into the house when one of us was present, but she showed a completely different face when friends, who had already been in the house, opened the yard door to enter the garden or the house without us: they were guarded until one of us appeared and told her that everything was fine. During the nights she notified us about any suspicious sound, but was composure herself, if it was only someone passing our house. Her greatest work was that once in the night she notified us about a smoldering fire in the house on the opposite side, although because of the weather situation all our windows were closed. This girl had an instinct which non of our other dogs ever had. And another event which will remain in our memory forever: the husband of her former owner appeared unannounced. He had - because of lack of German or English language - the cousin of his wife with him, who was formerly Arwa's defence trainer. All of a sudden they wanted money for Arwa, as we had had a litter with her. The cousin was greeted by Arwa (she always had had a good relationship to him, as I have seen myself when we had been for defense training in Slovakia), but the former owner was growled and barked at madly and did not get any chance to even make one single step into the garden, although we would have let him in for a discussion. Therewith, the matter money for Arwa was rather fast and convincing off topic. Since then we never ever heard again from the former owners or saw them.

Also Arwa was called much too early to go over the Rainbow Bridge. From one moment to the other her legs completely gave way in the late evening of September 24, 2000, and she could not get up anymore or make a single step when we tried to help her. We spent all night long besides Arwa and on the next morning the hard way to the vet was taken to let Arwa go.

You had been the best friends during lifetime, you and Marko. Five years and ten days after your separation, you both are together again - on the other side of the Rainbow Bridge. We meet each other again over there ......... sometime ..........