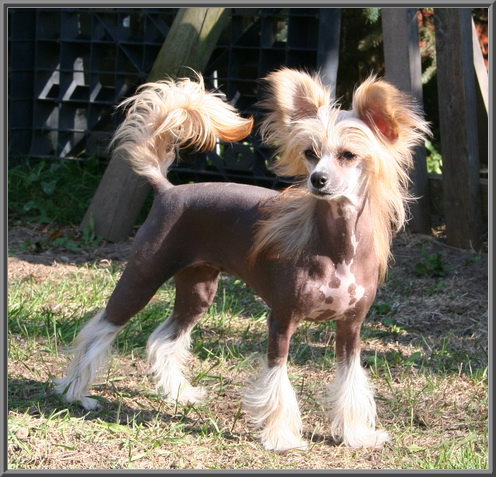 Ula was our second Chinese Crested, and she came here to us at the age of 15 months. She had been bought back home from her breeder, as she had been living under very bad conditions. Actually, her breeder wanted to keep her, but granting her a breeding right (for two litters) made it possible that we got Ula.

In the show ring Ula was absolutely successful. She only had her very first show just one week after her moving here, but came out of the ring with a great result. In the beginning Ula was a bit insecure, never ever she had got to know the hurly-burly at the shows (what all the others here already learn at early age), but she was trusting and so it was easy to get her used to all this and to present her calmly in the ring.

In June 2007 Ula turned to be Slovakian Champion. We continued showing her until January 2008, then there was a brake because of her second litter. From August 2008 on she was back in the show ring. The awaited last missing CAC for the title Slovakian Grand Champion was finally awarded at the National Specialty in Slovakia in September 2008. On the same day Ula was awarded Third Best Chinese Crested Female Slovakia 2007 by the Slovakian Chinse Crested Club. This was a very big surprise for us. And Ula continued her success: our next aim, to gain the title International Champion, was reached end of November 2008 at an international show in Croatia. In 2009 Ula was shown again several times in several countries, but only starting mid of 2009 as there was another show break, because Ula had her third litter, the L litter of our kennel Caipirinha's. On April 10, 2009, we received the diploma from FCI: on April 1, 2009, Ula has been awarded the title International Champion. On April 5, 2009, Ula passed the Austrian Special Selection, and finally, on February 26, 2010, she gained her last CAC for fulfillment of all conditions for the title Croatian Beauty Champion. With this result she said goodbye to the show ring, time had come for only being a couch potatoe - well deserved after most wonderful show results since mid of 2006 and after having four championships. On May 26, 2011, Ula had her fourth and last litter at the age of six and a half years, the N litter of our kennel. In our opinion four litters are enough for her, we don't want to "exploit" our females.

As Ula was still rather fit at the age of 11, we went for another show title. In February and August 2016 she was shown in veteran class, and on October 4, 2016, she was awarded the title Hungarian Veteran Champion. That was her final good-bye from the show rings but she joined me with Maverick and Hippie until 2019 to shows for diversion.

Ula is a very social, friendly, cuddly and well balanced girl, and also an excellent mother (she has proved this with all her litters). Being allowed to join her  is an absolute benefit!

On April 13, 2019, Ula was diagnosed with a chronical pancreatitis and a major filled gall bladder with the risk of bursting. The only option to safe her was the removal of the gall bladder which was done on April 16, 2019. Ula recovered rather fast according to her age (a bit over 14 years) and after a short time she could pursue her joys again. The only thing that needed to be taken care of was that she needed strict diet with the add of enzymes to each meal. She then started to turn a bit blind, deaf and demented but still enjoyed her life and nearly daily had an energy boost which animated her to toll around. Until mid of October 2020 everything went well, then she did not want her diet food anymore. Upon consultation with the vet she was allowed to have chicken and beef baby food, and she loved it. Beginning of November she began to eat less and got appetizing pills from the vet which worked great for 2 weeks. On 11/14/2020 she refused any and all food and in the evening she threw up. This had not happened since prior to her surgery. She was slack and only wanted to sleep. That was the sign for me that she had lost her will to live. She should not suffer, I had to let go. At noon on November 15, 11:20 a.m. - exactly 14 1/2 years after our combined life - she fell asleep forever in my armes with the help of our vet. 15 years, 9 months and 4 days was her age. For 14 1/2 years I could join her, and during all that time she gave me joy, luck, fun and love, for what I am endlessly grateful. The pain about her loss is indescribabla, but I try to tell myself that she could have already passed shortly after her 14th birthday - prior, during or after the surgery. By courtesy of our vet we had still got a bit more than one and years together. Even though she is not here anymore physically, she lives on in her son Maverick and her granddaughter Hippie. 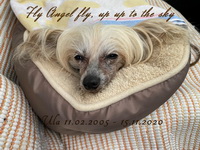 On November 18, 2020, Ula was cremated and I could go pick up her urn on the same evening. She is now placed on the board in my memory corner directly besides Keanu with whom she brought wonderful kids.

Ula, I will always miss you, each and every day of my life. But I have you deep inside my heart and the memories of our wonderful years together will give me the stregth to limit the grief - until we meet again one day ......