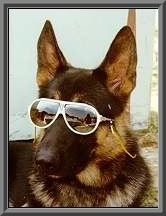 Marko, bred in the working dog department of the Vienna police, came to us in July 1989 at the age of 15 months. He was the first dog after a nine year long dog abstinent time. German Shepherds have already been family members after the War, and so we decided for this breed. It should be a grown up dog, as it should also be in the office, so search began. Customs and police from time to time placed dogs which were not suitable for their purposes.

In the working dog department of Vienna police 2 German Shepherds were available: a five year old female (Marko's dam) and the 15 months old Marko. We decided for him as he was very approachable and extremely friendly. The reason for placing this dog (without pedigree) was a weak character. As we found out shortly later, Marko was absolutely not of weak character: We had him tested by a defense working man and he was rather good in defense, in civil defense work even absolutely strong. We were recommended to go to an x-ray, and then we knew the real reason for placing: worst HD. We had a surgery done on Marko immediately to have the chance that maybe he could reach a nearly "normal" age and that he could have a most possible suitable life. Then we also got to know that at that time - in contrary to the military - police did not have to stick to any cynological rules, but just multiple if inquired.

As the purchase contract contained the reason for placing with "weak character, but otherwise healthy" we informed police and asked for a refund of part of the purchase price (which had been nearly as high as for a dog WITH pedigree), but they denied. Legal position was on our side and so we started a legal procedure and won out in the end: Police had to refund half of the purchase price and pay all the attorney's fees. As the Republic did not pay immediately after validity of the court decision, our attorney started a seizure of a public ground; then finally they paid rather fast.

In progress of the court proceeding we also found out that Marko had been moving between four police dog trainers in Vienna and Linz until his placing. Now it was clear why Marko was very devoted - nearly "pathological". He never had learned how to play, we had to teach him. At the training place I could watch that when Marko was joined by other dogs he did not continuously search for me, and so we made up our minds: a second dog was needed. It was no question that no second German Shepherd would be taken, at that time we intended to take a Doberman, but at an international all breed show in Vienna our eyes were caught by a breed that we had not known until then: the BRIARD. On 12/14/1990 Marko's future playing companion Sándor came to the house, and he was an absolute profit for this male. Finally he turned to be a real dog, learned how to play and toll around with his equals, and he enjoyed it. For Sándor, Marko was a perfect teacher, as Marko was - some might think this is incredible - a dog without any mistakes. So Sándor could only learn good things from him, at home as well as in the city, because also he was taken to the office from beginning on, and was daily on tour by train and subway.

In December 1992 a Briard girl, a daughter of Sándor came to our home (Arwa Betkin dvor), and she, too, learned lots of things from Marko. Nearly one year later the dam of this dog girl came here, too (Arwa Zevar). For her Marko was the big love of her life, as she had been living together with German Shepherds. Both of them were inseperable until Marko's death.

Marko also was a great play companion for our first litter, mainly way to patient with the little rascals. If it turned to be too much for him, he left - never ever he would have warned a puppy seriously.

Unfortunately Marko's condition caused by the HD turned bad in winter 1994/1995. In one go it turned to be obvious for us, that soon we had to say good-bye to this dog. We thought to serve pain killers for a long period of time is nothing lasting and another surgery was not possible. In our opinion an animal shall be able to die in dignity, and that is why we decided to lead Marko to his last trip as long as he could tolerably walk on his four legs. It was not easy and the worst thing in this matter was, that we had to fix the day for good-bye already some time in advance, because Marko should be released at home, on the quiet in his well known area. Our vet for such matters has Greyhounds and is showing them as well as going to races. So we had to find a weekend that she had time: day X was September 15th, 1995.

Never again we want to go through such a time - it is hell when you start counting the weeks first, then the days and finally the hours. Still it was the right decision: Because of his hip surgery and the many various treatments, Marko was always very stressed at vets, and this kind of stress was what I wanted him not to go through. Never in his life Marko was so calm and well-poised, and since months he had clear eyes again for the first time, without any sign of pain - as if he knew that he was released. Marko was lying in my arms when he started his trip over the Rainbow Bridge. As bad as this moment was, we wish that we can say good-bye to all our animals in this calm way when time has come.

Marko is unforgotten and we thank him for his "education" of some of our dogs, and for each day on which we were allowed to join him, even though the time together was way too short.