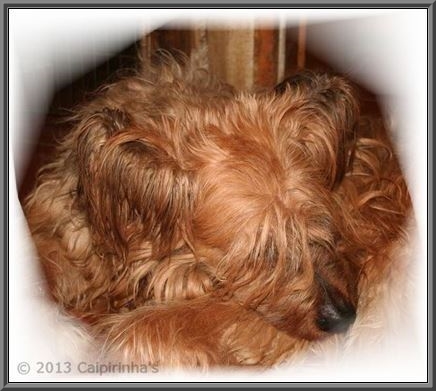 Sambo only came to us at the age of 11 years. His owners moved into an apartment and did not want to take him with them. His breeder Corinne tried intensely over a long time to find someone who was willing to take this senior, but in. When we heard about this, we decided to take Sambo if there was a possibility to bring him somewhere in Austria. So Corinne decided that she would take him with her at the occasion of her trip to the World Dog Show in Salzburg, and she picked him up from his owners a couple of days prior to her. She had to find out that Sambo was in a real miserable situation: he was too thin and his coat had not seen a bath or a brush for some years …… and he was stinking. His movement was bad, he must have had an accident and had never gotten a treatment - and he had. It seemed Sambo had never learned anything, he could not go on leash, he did not even know a collar, he could not play, he lived outside and only a hideout in the garage WITHOUT a dog bed or a. In her home Corinne started to clip Sambo as good as possible, she just could not manage the head before her departure to Salzburg, and she could not give him a bath. On May 19, 2012, I took over Sambo in Salzburg and drove home immediately. He was rather restless in the car, and Corinne had said, that the leash should be kept on during driving as he did not want to be leashed in a narrow.

During the first days Sambo unsettled and he only dared to get into the house with lots of encouraging, but soon again ran outside and spent most of the time on the verandah. So we left the verandah door open during the night so that Sambo could go in and out the way he wanted. There was no problem with the other dogs from beginning on, the Chinese Crested were introduced to him immediately, the Briards some days after his arrival. Still, he was separated from the other dogs when nobody could watch him - just for good measure because he had never learned it.

Immediately during the first days here Sambo got his throat and head clipped to have the last matts removed. With lots of patience it worked quite good. When he had enough from cutting, he got up and walked away, but let it happen again when he had lain down. As the weather was quite warm, we could also give him his urgent necessary small bath in the garden.

Sambo luckily ate well from beginning on, and he even gained a bit weight. Because of his body condition we took big care that he did not turn too fat. When he had found out that there are humans who care for him, he started barking when he wanted something. And latest at 7 a.m. he noisily demanded his food, no matter if we were still asleep or not.

With fall Sambo accepted that the verandah door was not open during day and night and he gave us a shout when he wanted to get outside. He was a loveable, friendly dog with a very good character. As time went by he even learned to play by watching the other dogs. On some days he moved too much which caused him more trouble with his movement. One had to force him to repose. Obviously he had missed so much in his life, he kind of wanted to catch up without understanding that this was not good for his sick bones and untrained body. He was so full of energy like a young dog. Our vet gave us some depot tablets which Sambo's body luckily tolerated and he also reacted well to them - even to half the dose. This way his life turned to be a bit livable. Soon no visitor could realize that this dog had only moved in.

Sambo grew very dear to our hearts. He appreciated the attention, which he had obviously not got during all his life, and he always strived for having us in his sight. If he lost us out of sight he started to bark and waited that either of us came over to him. In the garden he did not care if he was alone or not, and he only barked there when someone passed the garden fence.

Unfortunately the arthrosis of Sambogot worse during winter and so we had to serve him a higher dose of his medication. When he was in pain he growled and no dog was allowed to get too close to him. Soon even the maximum dose did not help anymore and Sambo reacted aggressive when he had pain attacks, towards the dogs and also towards us when we grazed him while passing by. So we had to make the very hard decision - even though it went against our moral sense - to let the poor boy go. On April 13, 2013, only 5 days after his 12th birthday Sambo went over the Rainbow Bridge. Even though he was not long with us, he took - like any other which has ever lived here - a part of our hearts with him. Our comfort is that now he is released and can run free with all the others from his family and the ones from here on the other side of the Rainbow Bridge. RIP sweet Sambo ......

Not even one year this great boy was granted a life which he should have had already from the beginning with his former owners. Apart from the fact that they just wanted to get rid of that dog, because he did not fit any longer into their life, they had utterly failed to grant him a beautiful life. Such people should take a stuffed animal.

Our thanks goes to Corinne for trusting us and for letting come this dog she bred to us - even though only for a short time. We hope we have given Sambo during the nearly 11 months here at least a little bit of what he could not have a whole lifetime. We had wished more time for him to be spoiled here and to join us ......