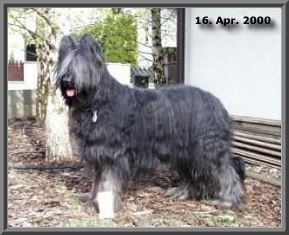 The best place to burry your dog
is deep within your heart ......

We were searching for a "buddy" for our German Shepherd boy Marko and visited a dog show Vienna in July 1990 to look for a breed. Actually we had the intention for a Doberman bitch, but we did not like what I saw. In the distance we got sight of something with long hair, and we liked the expression. So we got some information and found that this would be the ideal breed for us. We must admit that we could not think about any other breed from the moment of first sight of a Briard.

Now we started searching for breeders. We wrote many letters to Germany and France, but finally the decision fell for an Austrian breeder. When we visited that kennel for the first time, one of the bitches had just been bred and so we made an inquire for a puppy of her. On Oct. 1st, 1990, we received a phone call that the puppies were born. Every few weeks we went to Upper Austria to watch the puppies grow and to finally come to a definite decision. At this breeder one does not decide for a puppy, but the other way round: the puppy decides for its human, and so it was Sándor who decided for us at the age of 6 weeks.

Sándor stayed a bit longer than eight weeks with his breeder because we could only go on holiday shortly before Christmas. Finally, on December 14th, 1990, we could pick up Sándor. That therewith, already at that time the foundation-stone for the Briard-Mania was laid, was completely conscious to us, but in the following time it turned out to be so.

Sándor and Marko joined in the office each and every day - for three years. We were travelling with public conveyance, the office was in the center of Vienna. Therewith, he got to know at youngest age train, underground, elevators, masses of people, lots of traffic etc. - great conditions for an excellent socialization. He also learned within shortest time to walk correctly on the lead - he was with a combination chain connected to Marko, and from him he could only learn good things.

We also had ambitions for showing and thereof Sándor stood in the show ring already in puppy class. Besides Austrian shows we also visited some in Slovakia and Czech. The way to success was partly a stony one, since Sándor was, concerning coat length, extremely late in development, and we did not want to realize, that it would be better to leave the dog a rest after youth class for developing, before he went in competition with much older and completely developed dogs, and naturally had no chance against such competition. We liked it and we did not mind the pitying eyes of the one and other Briard owner. Still, we have learned out of that experience and have given our following Briards time to grow and develope before we showed them in open class.

We also visited the dog training place regularly. Sándor was good and always working happily and passed the first obedience examination with excellent. We made defense training as well, and Sándor had fun with it. Today we believe that out of his mental behavior we have taken him his youth with the consequent training, because he was a very earnest dog in a fast time, absolutely not what we could see in our Briards which came in the following years, which just visited a puppy playing lesson, learned the necessary things of obedience for daily life at home, and then, at an age of about one year, went to the training place.

With one and a half year Sándor bloated. Thank Heaven that we acted immediately when after eating he whined and looked at his belly continuously. It must have been our years with horses, that made us act so fast, since we were used to the look of a horse to the belly when it had a colic, and so made the combination that with Sándor it could only be bloating. Our vet did a wonderful job: he closed his clinic immediately for all other patients after we had arrived with Sándor, since it was clear that Sándor needed a surgery. The stomach was completely turned and the spleen strangled. The surgery lasted long but went fine. The problem that made Sándor being between life and death for some days was his blood circulation which nearly broke down completely, but he did it.

One month after the surgery he was in the show ring again and completely the same as before. And we made the first breeding confirmation at the same time. Looking back we must admit that we should have given him more time for that after the surgery, since he got his breeding confirmation only for one year. He showed "faults" that resulted from not having really recovered completely. Our own ambition and our eagerness had been too big. We are sorry that on the back of Sándor we learned from our mistakes.

Sándor was also used for breeding: his first partner was a bitch from Slovakia (Arwa Zevar CS), and on October 23, 1992, she whelped 12 puppies after him, whereof unfortunately 5 died. Out of this breeding the first girl came to this house. We had intended to take a tawny one, but the one and only tawny had died and so we decided for one of the three black girls, namely Arwa B., she was the most open minded and the most cheeky one.

The first litter in our kennel de la Maison du Garde-Barrière was also after Sándor, and it was with the same girl that he had bred in Slovakia, since we took this girl to us in August 1993. All in all Sándor had 46 puppies (28/18) out of four breedings. 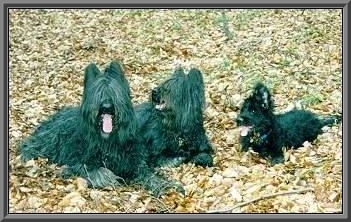 In July 1993 we went to the second breeding confirmation with Sándor and he passed and was recommended for life time.

Until 1998 we only travelled around for shows in Austria, Slovakia and Czech. But when we imported a girl from France (Yazoo) and with her visited lots of shows in Europe, we decided one day that also Sándor should be shown in the country of his origin at least one time, and so in May 1998 we went to the European Briard Championship in France. The main reason for this visit was actually to deliver two puppies of Yazoo to their owners and to introduce Sándor to the owner of his father, who had never heard anything about one of the Austrian offspring. Since we were there, we also entered Sándor to the show. Unfortunately one month earlier Sándor's sire had died and, therefore, the getting to know of my boy was a sad and painful one for the owner of Agar, as the two boys had been a mirror image. At the show in France, Sándor was not really successful: he got a "very good" from the judge with the argument: "coat too long". An irony, as we were happy that Sándor finally had a long coat and for this judge it was too long.

The shows which Sándor visited turned to be less when he got older. In 1997 he turned to be Slovakian Champion and that was in our eyes the best he could reach. As for the standard we have reached much with Sándor, we knew his "faults" and we stood to them. This boy has been shown about 90 times up to his beginning 10th year of life and he mainly received "excellent". It lasted about seven years that Sándor was completely developed concerning his coat - very late, but still early enough to "prove" that an "ugly duck" (lots of people have named Sándor like that) finally turned to be a beautiful Briard.

Except the bloat, Sándor had always been healthy. The yearly veterinary check in the year 2000 showed that this boy was - concerning his organs - like a five year old Briard and not a nearly ten year old one. Still, fate decided in another way: Much too early this boy was called. He died completely unexpected in the night of Jan. 12th to 13th, 2001. At 11 p.m. we had been out for a walk and he was as active and funny as always; at 1 a.m. we found him lying dead on his sleeping place - a shock, as everyone can imagine. But what "nicer" can one wish a beloved animal than being called to go over the Rainbow Bridge while sleeping. Looking back, we must admit that we are grateful for each single year that we were allowed to join Sándor, since he could have already died at the age of one and a half years while bloating; but still, for dog fanciers like us it is way too early when our darlings have to go.

Sándor has his very special place in our hearts although, of course, we love all our dogs dearly. But he was the FIRST Briard and he was the founder of our kennel de la Maison du Garde-Barrière. Having been the one who brought the breed Briard close to us and who taught us to love this breed so much, makes us be grateful to him and makes us have great respect for him.

Sándor, you were the GREATEST!!! We thank you for the nice years during which we could join you. You have ALWAYS been a faithful companion, not minding if our way was up or down. We will NEVER forget you!